libKF5Plasma provides the Theme class so Plasma elements and other applications, such as KRunner, that need to graphically hint or theme interface elements. This is not a replacement for QStyle, but rather provides standard elements for things such as box backgrounds.

This allows for easy re-theming of the desktop while also keeping elements on the desktop more consistent with each other.

Themes are stored in respective subfolders of share/plasma/desktoptheme. A theme is described by a metadata.desktop file in the top-level directory of such a subfolder.

Beneath this directory one will find the following file structure:

The X-KDE-PluginInfo-Name entry should match the name of the sub-folder in share/plasma/desktoptheme where the SVG files for this theme exist.

If the theme should inherit from another theme than the "default" one, this can be defined by a section like this (where the folder name resp. the X-KDE-PluginInfo-Name would be passed as value):

If you do changes to SVG files in your theme, make sure to update the version number X-KDE-PluginInfo-Version so Plasma can properly refresh its cache.

If your theme is not fully opaque, to improve readability of text or other elements, there are two options to ask the window manager to apply some effect for (KWin supports those):

a) One is adding some contrast to what is behind windows, panels or toolt ips (disabled by default), which is done by a section like this:

b) The other option is blurring what is behind windows, panels or tool tips. This is enabled by default. Since Plasma Frameworks 5.57, this can be disabled by a section like this (ignored otherwise):

Theme elements are accessed by path. Whether this maps to literal paths on disk or not is not guaranteed and considered an implementation detail of Plasma::Theme.

It is generally recommended to use Plasma::Svg instead of QSvgRenderer directly, however. This is because Plasma::Svg uses caching where it can. Remember to call resize() on the Plasma::Svg before painting with it!

If you use Plasma::Svg, changes to the theme are automatically picked up. Otherwise, you can connect to the changed() signal in the Plasma::Theme class. This signal is emitted whenever the theme is changed, which may be triggered by the user switching the theme used or system changes such as a composite manager becoming available.

The colors file follows the standard Plasma colorscheme file format and allows a theme to define what colors work best with its theme elements. The colors in this file can be edited with the default color scheme module.

The most common use of the colors file is to ensure that text is readable on various backgrounds.

Here is a list of color entries in the colors file that are currently actively used in a Plasma theme:

Other colors in the file may be used by individual widgets or used in the future, so it doesn't hurt to provide a complete colorscheme file and is probably a safer strategy.

Currently also used by individual widgets, which should give a good idea of additional usage patterns:

Same roles as Colors:Window, those are used in areas such as the logout screen, the screen locker etc, in order for them to have independent colors compared to normal plasmoids.

Note that some of these may end up folded back into Plasma::Theme properly at some point.

All background SVG's (except for wallpaper images) must have the following named elements, all of which will be painted at the native size (and can therefore be bitmaps), except for the center which will be scaled:

Some Plasma components may use the above named elements with prefixes. For example the panel placed on the left side of the screen uses the "west" prefix (west-topleft, west-topright, etc.).

Additionally, the following elements can be used to control the rendering of the backgrounds:

Next there can be optionally another element called overlay (or [prefix]-overlay if to be appled to a frame with a different prefix) it will be rendered over the frame as a filigrane effects, with the rules given from the following mutually exclusive hints:

An Inkscape extension exists to automatically rename SVG elements with the above naming spec.

It is possible to apply colors from the color scheme to a graphic. A very easy way to reach this is by adding an element with the id hint-apply-color-scheme to the SVG, In this case the rendered graphic gets converted to monochrome and colorized by the window background color. 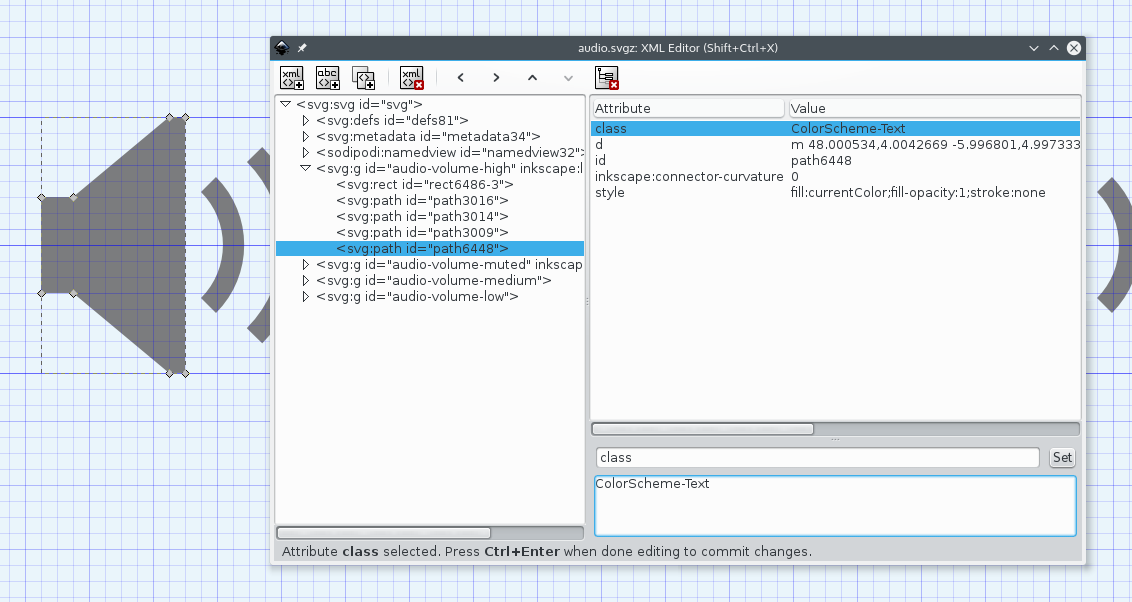 A more flexible solution is available by using CSS-styling. For this to work the SVG must have a style-element with the id current-color-scheme. Before the graphic is rendered this element gets replaced by a style containing classes where the color attribute is set to the corresponding system color. Currently the following classes are defined:

In order to apply a color from a class to an element, its fill or stroke attribute must be currentColor and of course the name of the wanted class has to be in the class-attribute. Special attention is needed on gradients, as neither the gradient-tags themselves nor the stop-tags accept classes. To still get the wanted result one can put a g-tag around them and apply the class to this.

In the Plasma-framework source repository, two useful tools are present:

Themes get installed to share/plasma/desktoptheme. Each theme is stored in an own sub-folder by the name of the theme with the following file structure (all files can be in either .svg or .svgz format):

In the special subfolder opaque/ the same hierarchy can be found again: when compositing is disabled files in this folder are preferred over the corresponding ones listed above. Only background for top level windows are appropriate to go in this folder.

Since top-level windows will be shaped according to the transparency of the SVG and window shapes don't support alpha-blending, if the SVG has rounded borders they should have a shape that don't require anti-aliasing, like the following example. 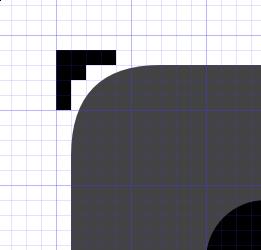 In the special folder translucent/ the same hierarchy is used as well: when the KWin Background Contrast effect is enabled the file under this folder will be used if found. As the opaque folder, only elements that will be rendered as window backgrounds should be present in this folder, so the dialogs folder, plus the panel and tooltip backgrounds. When is possible to blur the background of the window, the graphics can be more transparent, keeping the window text readable.

In the folder icons/, SVG files that contain scalable icons for use with application status items (e.g. icons in the system tray) are contained.

Some of the common icons:

Applications that use a function called setIconByName can have their icon in the system tray themed. Applications can have more than one icon (for example Konversation flashes between two different icons to highlight when your username is mentioned and Kpackagekit changes it's icon depending on the status of it's upgrade / installs). Theming these icons requires firstly that an application has been coded to use setIconByName, and secondly that you call your SVG object by the same name (use Ctrl+Shift-O in Inkscape). Then you can just put your .svg in share/plasma/desktoptheme/[themename]/icons.