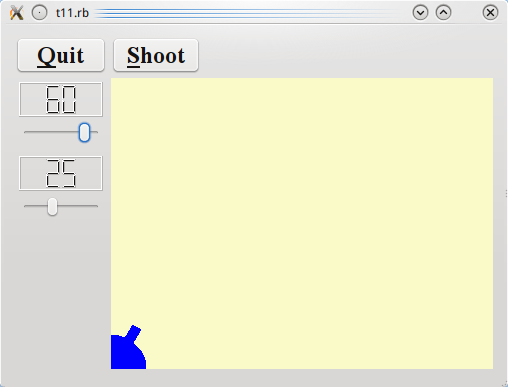 In this example we introduce a timer to implement animated shooting.

The CannonField now has shooting capabilities.

We include Math because we need the sin() and cos() functions.

We initialize our new private variables and connect the Qt::Timer::timeout() signal to our moveShot() slot. We'll move the shot every time the timer times out.

This function shoots a shot unless a shot is in the air. The timerCount is reset to zero. The shootAngle and shootForce variables are set to the current cannon angle and force. Finally, we start the timer.

moveShot() is the slot that moves the shot, called every 5 milliseconds when the Qt::Timer fires.

First we make a Qt::Region that holds the old shotRect(). A Qt::Region is capable of holding any sort of region, and we'll use it here to simplify the painting. shotRect() returns the rectangle where the shot is now. It is explained in detail later.

Then we increment the timerCount, which has the effect of moving the shot one step along its trajectory.

Next we fetch the new shot rectangle.

If the shot has moved beyond the right or bottom edge of the widget we stop the timer, or we add the new shotRect() to the Qt::Region.

Finally, we repaint the Qt::Region. This will send a single paint event for just the one or two rectangles that need updating.

The paint event function has been simplified since the previous chapter. Most of the logic has been moved to the new paintShot() and paintCannon() functions.

This private function paints the shot by drawing a black filled rectangle.

We leave out the implementation of paintCannon(); it is the same as the Qt::Widget::paintEvent() reimplementation from the previous chapter.

This private function calculates the center point of the shot and returns the enclosing rectangle of the shot. It uses the initial cannon force and angle in addition to timerCount, which increases as time passes.

The formula used is the standard Newtonian formula for frictionless movement in a gravity field. For simplicity, we've chosen to disregard any Einsteinian effects.

The only addition is the Shoot button.

In the constructor we create and set up the Shoot button exactly like we did with the Quit button.

Connects the clicked() signal of the Shoot button to the shoot() slot of the CannonField.

The cannon can shoot, but there's nothing to shoot at.

Make the shot a filled circle. [Hint: Qt::Painter::drawEllipse() may help.]

Change the color of the cannon when a shot is in the air.


This page was last edited on 18 July 2012, at 14:22. Content is available under Creative Commons License SA 4.0 unless otherwise noted.