Difference between revisions of "Projects/Plasma/Tokamak3"

Disclaimer: This page is work in progress atm!!!

The third Tokamak Plasma Meeting will take place in Randa, Switzerland on August 28 to September 5, 2009.

The meeting will take place in a Chalet in Randa. Randa is a small village in the middle of the Alpes surround by more the 30 mountains higher than 4000 meters. It's near to Zermatt, a very famous summer and winter tourist place.

There will be several rooms, hardware, wireless and wired LAN and a phenomenal surrounding. See here for some pictures of the house and the panorama.

The Chalet has the following rooms:

I intend to accommodate up to 10 people in the Chalet. 3 to 4 (depending on your preferences) in two bed rooms. 2 to 3 people in the living room and me and another organizer in the parents bed room. There is a double bed in one bed room (and a special bag couch ;-) and two singles beds in the other bed room. For the rest I'll try (no I will ;-) to organize mattresses.

For additional people I'll either organize an appartement 1 minute away or an appartement further away or some hotel rooms. Depends on your preference below (see and fill the table).

And there is still the possibility for a tent ;-). But, and that's very important in general, take warm clothes with you. We are on 1440 meters over sea!

I'll organize this as well for sure. And some Raclette.

I'll organize a wired LAN and a wireless one. The house has a decent DSL internet connection but I'll see what else I can organize.

Furthermore there should be some icecc infrastructure and special hardware to play with.

In Switzerland we have our own connectors. Please don't forget to bring some adapters. I'll organize some myself.

Randa and Switzerland is in the middle of Europe and as this reachable from several directions. There are three possible airports:

From these airports you'll take the trains to reach Randa (which takes approx. 3 hours). Information about the train schedules can be found on the webpage of the Swiss federal railways SFR.

By train via Zurich and Visp (change the train there). Duration: 3 hours and something.

By train via Visp (change the train there). Duration: 3 and a half hours.

By train via Visp (change the train there). Duration: atm unknown. Still investigating.

The track from Visp to Randa is frequented by a very famous train: the Glacier Express which is known as slowest fast train of the world ;-).

And don't forget your walking shoes. What about a Plasma BoF near a glacier ;-).

Road to the Chalet

Ok, when you arrive in Randa by train go up to the street (you get out of the train at left). Then follow the street to the right up to the crossroads (and a big house called "Maria am Weg"). There left up to the church where the road turns left. At the next branching take the right on and follow the street several 100 meters. After some stables at right right the Chalet "Nachtigall" appears. Final destination. It takes you 10 to 15 minutes.

If you'd like a map. Go to http://www.randa.ch (in german only) click to "Ortsplan" at the top. The red dot is the train station. Search for the Chalet Nachtigall at "Ferienwohnungen" at the left side.

And here following you find a photo about the way to the Chalet: 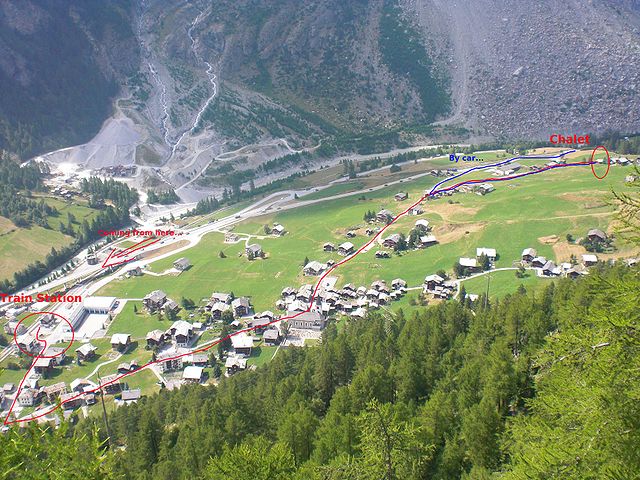 Even if Switzerland is quite expensive and Zermatt more than ever I want to show you this special village at night guided by some friends. I don't know if we find a karaoke bar ;-).

A friend of mine is right now building his new house and as he's an eletrical engineer he wants to automate his house. I told him about Plasma and he's very interested about the interface. He tries to be there these days so what about the first automated house controlled by or with Plasma?!?

As you can ski in Zermatt even in the summer ...

BTW: Thanks SebastianTrueg for the template ;-).


This page was last edited on 27 August 2009, at 22:25. Content is available under Creative Commons License SA 4.0 unless otherwise noted.