This page is dedicated to technical aspects of KMyMoney for KDE Platform 4. If you are looking for other info, or the source tarball, go to the official page of KMyMoney. 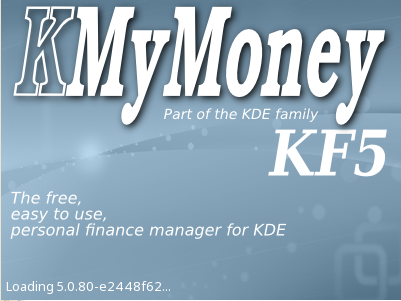 KMyMoney 5.0.0 has been released on 2nd of February 2018. Alternatively, you can get the source from the KDE Git. (see link below)

Additionally, you may want to install other libraries that will provide additional functionality:

If possible, it is always preferred to use a package specifically prepared for your distribution. However, if one is not available, or you want a more recent version, you can use the latest tarball. If you really need the most recent version, such as to test a new bug fix, get the source from KDE Git at

To install, read the README.cmake file in the root folder of the source. The basic steps are the following:

First, make sure you have uninstalled any old versions of kmymoney through your package manager and/or sudo make uninstall depending on how it was installed last time. Then:

It is important that the prefix is the same one that is used by your already installed KDE software. If it does not match, you will run into problems later. The separate build directory is mandatory (out of source build). The install step should be executed with admin privileges. Either switch to root or use sudo, or the appropriate steps for your installation.

To localize you will need to download the appropriate kmymoney.po file from http://websvn.kde.org/trunk/l10n-kf5/<country_code>/messages/extragear-office/ (replace <country_code> with the correct one for your locale e.g. es would give http://websvn.kde.org/trunk/l10n-kf5/es/messages/extragear-office/) and then, either by switching to root or using sudo, do the following:

For 3.95 version and later, we use the Bugzilla tracker at bugs.kde.org (BKO). Any bugs you find, please report it and assign to product kmymoney. Also, if you need help write to [email protected]

Obtain a useful backtrace on Windows

If you would like to create a bug report about an application crash on Windows you need to take care of the following to create a useful report:

Open a command shell in kmymoney 'bin' dir and run

Then start kmymoney with

Open a command shell in kmymoney 'bin' dir and run

Then start kmymoney with

Development is active on trunk towards the next version. There is a wishlist of features which might be integrated in future releases.


This page was last edited on 20 September 2018, at 21:22. Content is available under Creative Commons License SA 4.0 unless otherwise noted.