Required or recommended tools for development and using KDE libraries and applications under MS Windows.

"Ever wondered which program has a particular file or directory open? Now you can find out. Process Explorer shows you information about which handles and DLLs processes have opened or loaded." (freeware, for all Windows versions) more 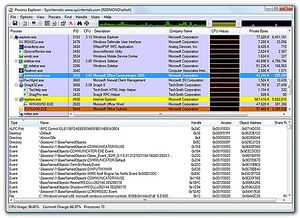 You can use Debugging Tools for Windows package to debug drivers, applications, and services on systems with Windows NT kernel. (freeware) more

Among others, Debugging Tools for Windows do contain:

WinDbg (windbg.exe), a user-mode and kernel-mode debugger with a graphical interface. It can also be used to debug user-mode crash dumps (postmortem debugging).

Form [1]: "WinDbg provides source-level debugging through a graphical user interface and a text-based interface. WinDbg uses the Microsoft Visual Studio debug symbol formats for source-level debugging. It can access any public function's names and variables exposed by modules that were compiled with Codeview (.pdb) symbol files. WinDbg can view source code, set breakpoints, view variables (including C++ objects), stack traces, and memory. It includes a command window to issue a wide variety of commands not available through the drop-down menus. [..] It also allows you to remotely debug user-mode code.",

Logger (logger.exe and logexts.dll), a tool and a plugin DLL that record the function calls and other actions of a program,

LogViewer (logviewer.exe), a tool that displays the logs created by Logger,

Debug messages (logs) generated by kDebug() and kWarning() are not visible on MS Windows unless application is compiled in so-called CONSOLE subsystem. To show these messages also in WINDOWS subsystem, you can use DebugView tool. The tool offers searching in logs, filtering them using wildcards and saving them to file. (freeware) more 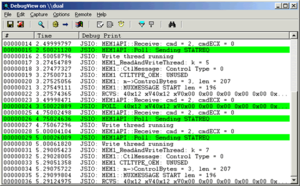 A tool for checking dependency of shared libraries. This utility that scans any 32-bit or 64-bit Windows module (exe, dll, ocx, sys, etc.) and builds a hierarchical tree diagram of all dependent modules. (freeware) more 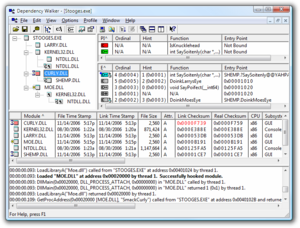