Difference between revisions of "Development/Tutorials/SuperKaramba" 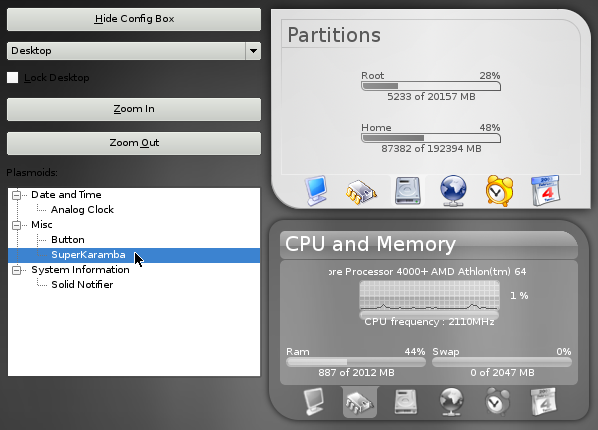 An introduction to the format parameter for a text meter:

Using of a the "time" Plasma::DataEngine:

SuperKaramba runs as standalonea-application - just run the program "superkaramba" - as well as Plasma Applet embedded into the Plasma Workspace. Also SuperKaramba provides full and transparent access to the Plasma::DataEngine's with it's sensor functionality.

Following scripts are showing how to use the Plasma functionality in SuperKaramba.

Following Python sample demonstrates usage of the Plasma::DataEngine functionality by using the TimeEngine to display the current local time.

You are also able to provide an own handle that defines what should be done if the Plasma::DataEngine has new or updated data for an widget or a meter.

Plasma in a SuperKaramba Theme

Now lets take a more detailed look at a longer sample that uses SuperKaramba and the PlasmaApplet module. While the sample above runs in all cases, the following sample does not cause the used PlasmaApplet module will be only available if SuperKaramba is running as Plasma Applet. If you are running SuperKaramba as standalone application this wan't work (is there interest for this? - but both ways provide the same rich API functionality to work with Plasma::DataEngine's anyway).