Difference between revisions of "Development/Tutorials/Plasma5/QML2/HelloWorld" 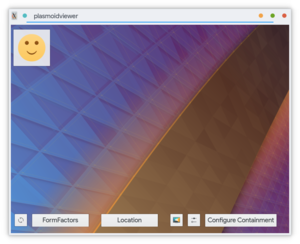 Pop over to your ~/.local/share/plasma/plasmoids folder. You should see a new item, org.kde.hellomoid. This is the reorganized and packaged version of your code, named according to the

It's actually a directory, so you can cd into it and view the contents. Note that this directory is the usual destination for plasmoids you download and install yourself. So feel free to open them up and see what's inside. For the record, the KDE-created, pre-installed plasmoids are in /usr/share/plasma/plasmoids (as of this writing - February 2018, on Kubuntu 17.10 - different distros or versions may store them somewhere else).