Difference between revisions of "Development/Tutorials/KWin/Scripting"

Warning
KWin's Scripting functionality has been reworked for KDE Plasma Workspaces 4.9. This tutorial does not cover the previous API. In case you had an existing script, please consult Scripting Update Notes for migration note.

The easiest way to test KWin scripts is to use the Plasma Desktop Scripting Console which can be opened via the KRunner window (Alt+F2, by default, or via the "Run Command" entry in various desktop menus) by entering "wm console" as the search term It can be triggered directly via dbus with

Note
This method is not available for plasma-netbook.

In order to have KWin load a script on each session start the script has to be packaged. KWin Scripts use the Plasma Package format. The recommended file ending for KWin Script packages is .kwinscript. In the metadata.desktop file of the package the value for "X-KDE-ServiceTypes" has to be KWin/Script, as "X-Plasma-API" only javascript and declarativescript are supported.

A packaged KWin Script can either be installed via the KWin Script KCM (note: the list does not yet reload after installing a script) or with the plasmapkg tool:

After installation the script has to be enabled in the KWin Script KCM. The window manager will load the newly installed script directly at runtime as well as in new sessions.

The following global functions are available to both QML and QtScript:

The window manager calls a window it manages a "Client". Most methods of workspace operating on windows either return a Client or require a Client. Internally the window manager supports more types of windows, which are not clients. Those windows are not available for KWin Scripts, but for KWin Effects. To have a common set of properties some properties and signals are defined on the parent class of Client called Toplevel. Be sure to check the documentation of that class, too when looking for properties. Be aware that some properties are defined as read-only on Toplevel, but as read-write on Client.

The following examples illustrates how to get hold of all clients managed by the window manager and prints the clients' caption:

The following example illustrates how to get informed about newly managed clients and prints out the window id of the new client: 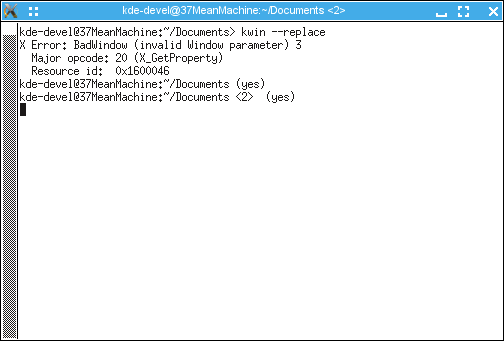 The script in Plasma Package structure can be found in the kde-examples repository.


This page was last edited on 2 March 2012, at 06:41. Content is available under Creative Commons License SA 4.0 unless otherwise noted.