KOffice is an interated Office Suite consisting of several applications where KSpread is the scriptable spreadsheet program which provides both table-oriented sheets and support for complex mathematical formulas and statistics.

The KSpread Scripting Plugin implements a plugin to dynamic access the scripting functionality from within KSpread. The plugin realizes usage-scenarios like;

The whole KSpread Scripting Plugin, that does handle all things related to scripting for KSpread, consist of only a small hand full of files;

The goal was to limit the work needed on an application to have it full scriptable. To achieve this internaly Qt's introspection-functionality like signals, slots, properties, enums, QObject's and QMetaObject/QMetaType/etc. is used to deal with functionality at runtime. To get a more detailed overview you may like to take a look at my talk about scripting with Kross.

Kross is included in the kdelibs4 (KDE4 libraries). The Kross scripting framework consists of the Kross library which handles the Kross interpreter-backend details and the "kross" commandline-application which could be used to execute Python, Ruby or KDE JavaScript scripts direct from the commandline rather then embedded in an application like KSpread.

The KSpread Scripting Handbook (PDF) contains a full reference of the functionality accessible from within the scripting backends.

The htmlexport.py Python script demonstrates how extensions could be used. The script exports the content of the current sheet to a HTML file.

Extensions are located in the "Tools->Scripts" menu and are either distributed with KSpread (so some default extensions like the htmlexport.py script are installed together with KSpread as part of it) or could be later added and configured on demand using the "Script Manager".

Once the htmlexport.py Python script got executed, it displays the "HTML Export" dialog to let the user define the HTML file that should be written and some additional details like Document Informations or Styles. For GUI-related things you are also able to use PyQt4 or Tkinter in your python scripts, Korundum/QtRuby in your Ruby scripts, KjsEmbed4 (KjsEmbded4 is included in kdelibs4 now) in your JavaScript scripts or the more high-level Kross forms (used in the htmlexport.py as shown in the screenshot below) in all interpreter-backends.

If the user clicks on the "Ok" button the export-process starts and a progress-dialog is displayed to offer visual feedback while the Python script reads the content from the current sheet and writes it to a HTML file.

KSpread has a rich set of formula functions for nearly every purpose. KSpread implements the whole set of the OpenFormula specification and could be easy extended with additional formula functions written in a scripting language.

Now we run KSpread with the --scriptfile argument that points to the delivered functions.py example.

The screenshot below shows KSpread using the new formula function "SCRIPT_TEST1" which was added and is handled in the functions.py script.

All at the functions.py script added formula functions are accessible via "Insert=>Function..." in the "Scripts" category.

The following screenshot shows KSpread in action running the python script that provides us the R-Project functions. 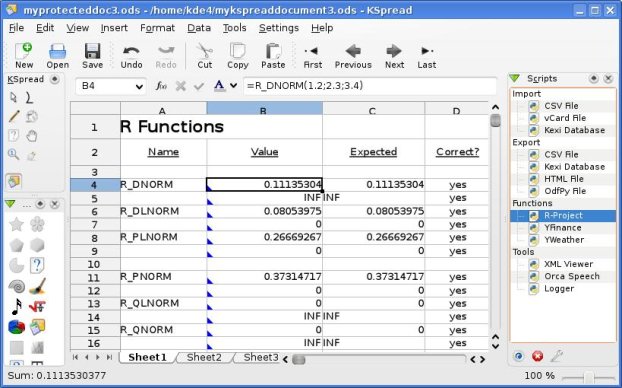 KSpread ships the both python scripts yfinance.py and yweather.py that offer finance and weather formula functions using the Yahoo! Web-services.

KOffice Dockers are plugins that provide graphical user interface elements within a QDockWidget embedded into a KOffice application like KSpread. Such docker plugins could be also be written in a scripting language like demonstrated below.

The consoledocker.py Python script does provide a interactive Python Console Docker to KSpread.

The script does use PyQt4 to embed widgets like a QTextBrowser or a QTreeView for the GUI related stuff. For this we use PyQt's SIP to pass around void* pointers. The following python code demonstrates how KSpread's KoScriptingDocker provided on the fly via Kross got translated into the PyQt world.

Those consoledocker.py Python script is defined within the scripts.rc in a collection named "docker". If KSpread starts and the scripting plugin got loaded, for each script within that "docker" collection a Docker will be created. Once such a docker got shown/displayed, the defined scripting file will be executed.

The snippetsdocker.rb Ruby script does use QtRuby to embed widgets as docker into KSpread. The script does provide different sample actions to the user.

Just like at the Python Console script above we registered the snippetsdocker.rb Ruby script in the scripts.rc file in the "docker" collection;

The functionality KSpread offers could also be used direct from the commandline without a running KSpread instance. In that case a script written in Python, Ruby or KDE JavaScript controls what should be done and the KSpread library is loaded and used in the background to deal with the whole KSpread-stack on a high-level. This enables to batch-process or automated creation and/or manipulation of OpenDocument Spreadsheet files. Complex calculations, document-manipulations and workflows without any user-interaction could be scripted and executed from the commandline that way.

Following samples are implementations of use-case scenarios KSpread could be used for. The scripts are simple executable files that run from within the commandline by using the "kross" application which is installed together with the Kross scripting framework.

The htmlexport.py Python script distributed with KSpread could also be executed from the commandline;

The odfpyexport.py Python script distributed with KSpread uses the OdfPy Python module to write an OpenDocument text file (ODT) from KSpread. Take the script as example how easy scripting with KSpread is and modify it to your needs to produce custom OpenDocument files.

The both python scripts kexidbimport.py and kexidbexport.py are providing functionality to import content from or export content to a Kexi project file.

Zope is an open source application server for building content management systems, intranets, portals, and custom applications with a large community of hundreds of companies and thousands of developers all over the world. Zope is written in Python, a highly-productive, object-oriented scripting language and supports the XML-RPC and SOAP protocols.

The kspread2zope.tar.gz tarball includes a Python script that demonstrates how to connect KSpread with the Zope application server using XML-RPC. What the script does is to download a resource from the Zope server, then parses it into KSpread sheets, changes some content and then either save it as OpenDocument Spreadsheet file or upload the content at the Zope server.