Warning
This page needs a review and probably holds information that needs to be fixed. 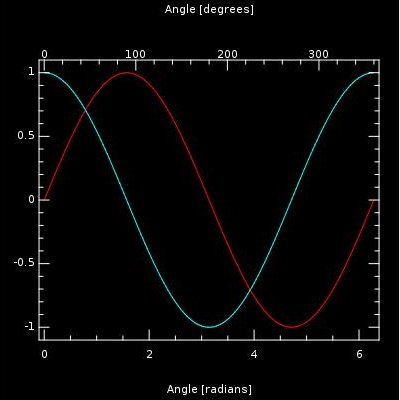 If you would like your plot to include a grid overlay, simply add:

The grid lines are placed at the positions of major tickmarks along the Bottom and Left axes.

By default, KPlotWidget will automatically compute how much padding is needed outside of each Axis, to provide room for tickmark labels and/or the axis label, if they are present. If you need to override these calculations, the padding on each axis can be set manually with the functions setTopPadding(int), setBottomPadding(int), setLeftPadding(int), or setRightPadding(int), where the argument is the size of the padding in pixels.

If you need to restore the automatic calculation of the axis padding, you can set the padding of any axis to -1, or use setDefaultPaddings() to restore all four axes at once.

Why would one want to do this? One possibility is shown in the example image at the beginning of this tutorial: you may want to express the data using two different units. In the case of the example, we are plotting angles on the x-axis; the angles are shown in both degrees (top axis) and in radians (bottom axis).

The secondary data limits are stored internally as a QRectF, just like the primary limits. To set the secondary limits, so something like:


This page was last edited on 31 May 2019, at 14:35. Content is available under Creative Commons License SA 4.0 unless otherwise noted.