Difference between revisions of "Development/Architecture/KDE3/XMLGUI Technology"

Defining the menu and toolbar structure in XML

While the action pattern allows to encapsulate actions triggered by the user in an object which can be "plugged" somewhere in the menu bars or toolbars, it does not by itself solve the problem of constructing the menus themselves. In particular, you have build all popup menus in C++ code and explicitly insert the actions in a certain order, under consideration of the style guide for standard actions. This makes it pretty difficult to allow the user to customize the menus or change shortcuts to fit his needs, without changing the source code.

This problem is solved by a set of classes called XMLGUI. Basically, this separates actions (coded in C++) from their appearance in menu bars and tool bars (coded in XML). Without modifying any source code, menus can be simply customized by adjusting an XML file. Furthermore, it helps to make sure that standard actions (such as File->Open or Help->About) appear in the locations suggested by the style guide. XMLGUI is especially important for modular programs, where the items appearing in the menu bar may come from many different plugins or parts.

KDE's class for toplevel windows, KMainWindow, inherits KXMLGUIClient and therefore supports XMLGUI out of the box. All actions created within it must have the client's actionCollection() as parent. A call to createGUI() will then build the whole set of menu and tool bars defined the applications XML file (conventionally with the suffix ui.rc).

An example: Menu in KView

In the following, we take KDE's image view KView as example. It has a ui.rc file kviewui.rc, which is installed with the Makefile.am snippet

Here is an excerpt from the kviewui.rc file. For simplicity, we show only the definition of the View menu.

The corresponding part of the setup in C++ is:

The View menu resulting from this GUI definition looks like in this screenshot: 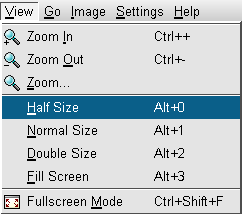 The XML file begins with a document type declaration. The DTD for kpartgui can be found in the kdelibs sources in kdeui/kpartgui.dtd. The outermost element of the file contains the instance name of the application as attribute. It can also contain a version number in the form "version=2". This is useful when you release new versions of an application with a changed menu structure, e.g. with more features. If you bump up the version number of the ui.rc file, KDE makes sure that any customized version of the file is discarded and the new file is used instead.

The next line, <MenuBar> contains a declaration of a menu bar. You can also insert any number of <ToolBar> declarations in order to create some tool bars. The menu contains a submenu with the name "view". This name is already predefined, and thus you see a translated version of the word "View" in the screenshot. If you declare your own submenus, you have to add the title explicitly. For example, KView has a submenu with the title "Image" which is declared as follows:

In KDE's automake framework, such titles are automatically extracted and put into the application's [kde-i18n-howto.html .po] file, so it is considered by translators. Note that you have to write the accelerator marker "&" in the XML compliant form "&amp;".

Let us come back to the example. KView's View menu contains a couple of custom actions: zoom50, zoom100, zoom200, zoomMaxpect and fullscreen, declared with a <Action> element. The separator in the screenshots corresponds with the <Separator> element.

You will note that some menu items have a corresponding element in the XML file. These are standard actions. Standard actions are created by the class KStdAction. When you create such actions in your application (such as in the C++ example above), they will automatically be inserted in a prescribed position, and possibly with an icon and a shortcut key. You can look up these locations in the file kdeui/ui_standards.rc in the kdelibs sources.

An example: Toolbars in Konqueror

For the discussion of toolbars, we switch to Konqueror's GUI definition. This excerpt defines the location bar, which contains the input field for URLs.

The first thing we notice is that there are a lot more attributes than for menu bars. These include:

Obviously, an XML can only contain a static description of a user interface. Often, there are menus which change at runtime. For example, Konqueror's Location menu contains a set of items Open with Foo with the applications able to load a file with a given MIME type. Each time the document shown changes, the list of menu items is updated. XMLGUI is prepared to handle such cases with the notion of action lists. An action list is declared as one item in the XML file, but consists of several actions which are plugged into the menu at runtime. The above example is implemented with the following declaration in Konqueror's XML file:

Note that in contrast to the static actions, the ones created here are not constructed with the action collection as parent, and you are responsible for deleting them for yourself. The simplest way to achieve this is by using openWithActions.setAutoDelete(true) in the above example.

Also note that to be able to extend menus this way, you need to call createGUI() with the second parameter (conserveMemory) set to "false". If you don't, you won't get any error but your actions won't appear in the menu.

The examples above only contained cases where a main window's menubar and toolbars were created. In the cases, the processes of constructing these containers is completely hidden from you behind the createGUI() call (except if you have custom containers). However, there are cases, where you want to construct other containers and populate them with GUI definitions from the XML file. One such example are context menus. In order to get a pointer to a context menu, you have to ask the client's factory for it:

The method KXMLGUIFactory::container() used above looks whether it finds a container in the XML file with the given name. Thus, a possible definition could look as follows:


This page was last edited on 13 July 2012, at 15:24. Content is available under Creative Commons License SA 4.0 unless otherwise noted.